Celebrate! – the days of proofs that a commercial printer can’t match are over. ISO 12647 has driven the nail firmly into that coffin.

At Colour Proofing we offer proofs to ISO 12647-2, ISO 12647-3 and ISO 12647-4 which cover sheetfed litho, heatset web litho, newsprint and gravure printing processes. All of our Proofs are produced to Fogra standards using CGS RIP software driving Epson printers with Ultrachrome inks, now the proof of choice for printers.

The Fogra standards cover the various printing processes on the various stocks as specified by ISO 12647 : Graphic technology – Process control for the production of half-tone colour separations, proof and production prints.

Below you will find the recommended separation profiles for the relevant print/proof standard and stock. All profiles are available free of charge from European Color Initiative www.eci.org.

Other relevant standards in print:

PDF/X-1a is designed to provide the most robust and least flexible delivery of PDF content data. It requires that the colour of all objects be expressed in CMYK or spot colours, all prepared for the print conditions under which the final press-work will be run. Elements in RGB and Lab colour spaces or tagged with ICC profiles are prohibited. It also requires that all fonts used in the job be embedded in the supplied PDF file and disallows the use of transparency and layers (optional content). This format is generally recognised as the defacto standard in the print industry and is the least likely to lead to any surprises when processed by your printer.

Further instructions on creating and working with PDF/X-1a can be found at www.gwg.org and www.ppa.co.uk. Set up files for Adobe InDesign and Quark Xpress can be downloaded at www.ppa.co.uk.

Whenever possible follow the guidelines set out by the PPA at www.pass4press.com

Whenever possible use preset files available at www.gwg.org or ask your printer

If you are using the Adobe Creative Suite create a CSF file and use Adobe Bridge to apply the CSF to all your Adobe applications. The settings below are a good generic starting point or you can download from www.pass4press.com

Check you have the correct trim and bleed size 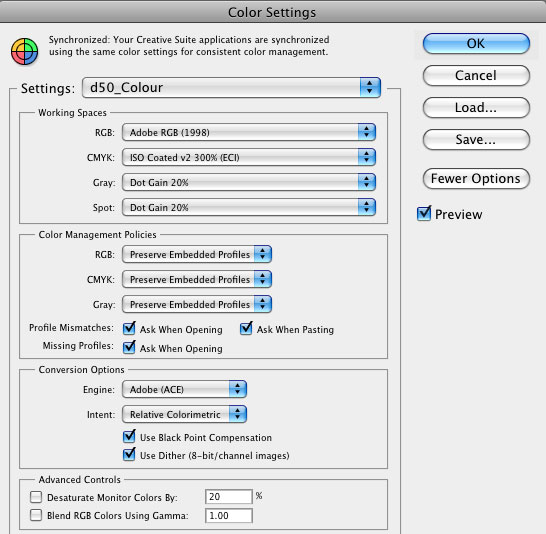 Most PDF errors can be easily avoided by following the pass4press guidelines. Utilise the downloadable presets in combination with the correct colour profile for the job. Even though pass4press v10 concentrates on InDesign CS4 and QuarkXPress 8, older versions of both can export PDF/X-1a. You can also make a PDF/X-1a file from a PostScript file Ã¢ÂÂ something that can be created on any computer with a PostScript driver and a copy of Adobe Distiller installed. If you’re using a non-standard app, try and match the guidelines in this brochure as closely as you can, but be realistic about the software you’re using: no matter how hard you try, a print PDF is going to be difficult to create from some packages.

If you have a PDF which hasn’t been output to the PDF/X-1a standard it can look like it’s riddled with problems. Just re-exporting with the PDF/X-1a box ticked will usually remove most of the errors. The Output Intent is a key part of creating a PDF/X-1a and has to be there for the file to be valid, even though it is in effect just informational. A PDF/X-1a contains ‘flat’ CMYK: the Output Intent field tells the receiver what profile you used to export the PDF and how its content was theoretically prepared; it demonstrates that you’ve followed the correct spec. The Output Intent is set in the Output tab in InDesign or via the Output Colour Setup in XPress. When you open the PDF/X-1a in Acrobat and view the Output Preview, the Output Intent profile is displayed by default at the top of the window.